Some of the Glorious Catholic Feasts of July

July 16: Our Lady of Mt. Carmel and the Scapular: In 1251, the most extraordinary event in English history

The Mother of God and her Divine Son appear to Saint Simon Stock in Cambridge -- 769 years ago today, in 1251: has there been any other moment in English history whose consequences have aided so many souls throughout the world achieve and keep holiness, reaching final perseverance? Men and women, made of flesh, need material reminders of the presence of God in their lives -- and what could be more profitable than the blessed physical sign that Our Lady's Mantle covers us at all times, that Her Divine Son keeps watch over us day and night? 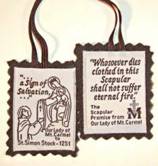 Armatura fortis pugnantium furunt bella tende praesidium Scapularis.
The strong of armor of those in combat, wars rage, deploy the defense of the Scapular.

The scapular (from Latin scapulae, "shoulders") is a Christian garment suspended from the shoulders. There are two types of scapular, the monastic and devotional scapular, although both forms may simply be referred to as "scapular". As an object of popular piety, it serves to remind the wearers of their commitment to live a Christian life.

Et fidelium animae per misericordiam Dei requiescant in pace. Amen.
May the souls of the faithful departed through the mercy of God rest in peace. Amen.

July 17:1794 Martyred by the Terror of the French Revolution: 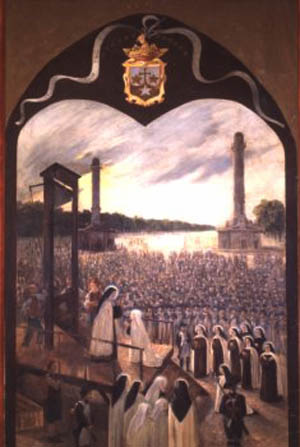 Compiègne: "To the poorest daughter of Carmel, honor speaks louder than fear."

First Commissary: I forbid you to continue...

Mother Marie: You have the power to force me to silence, but none to command me to it. I represent here the Reverend Mother Prioress and I shall take no orders from you.

A Commissary: Confounded old hag! She cannot be made to hold her tongue, fellow Citizen, but remind her that the Republic has a machine at its disposal that will leave her somewhat short of breath!

First Commissary: Enough! I repeat that you must behave as a true representative of the people! [He turns to Sister Blanche:] Young citizen, you have nothing to fear from us, who are your liberators! Say but one word, and you will find yourself beyond the sway of those who, to better put you in their power, have not feared to offend nature in usurping even the sacred name of "mother". Henceforth, you are under the protection of the Law.

Mother Marie: But she is first under my protection. Do you think I shall permit you to take any further advantage of the terror of a child? I shall take great care to avoid a language that you cannot understand. You know nothing of that which holds us here and keeps us united unto death - or, if once you knew it, it is now certainly forgotten. But there are still perhaps words which are common to us, and which can touch your conscience. Well, sir, you must know that to the poorest daughter of Carmel, honor speaks louder than fear.

Each of the Choir nuns paused at the foot of the scaffold and renewed their vows to the Prioress, Mother Teresa of St. Augustine, as they began to chant “Laudate Dominum omnes gentes”. They each kissed a small statue of the Blessed Virgin Mary and mounted the scaffold starting with the youngest, Sister Constance, who made her final vows just before she died:

Three lay sisters, who had helped the choir nuns with chores and hospitality and two externs, who had been the nuns’ contacts with the outside world, also suffered martyrdom:

The chant ended when the Prioress was guillotined. Their bodies were loaded into a cart and hauled off to the Picpus Cemetery, where they were dumped into a mass grave. There is a moving dramatization of this with music by Francis Poulenc.

Lord God, you called Blessed Teresa of St Augustine and her companions to go on in the strength of the Holy Spirit from the heights of Carmel to receive a martyr's crown. May our love, too, be so steadfast that it will bring us to the everlasting vision of your glory. Through Christ our Lord. Amen.

On the day following her feast, the Blessed Virgin of Mount Carmel would receive her dear French daughters, martyred for their faith in her Son and for their loyalty to His Church. O glorious Martyrs of Compiègne, pray for us!